A performance by artist Kanye West at Joel Osteen’s Lakewood Church in Houston on Sunday has launched a debate among Christians over controversial prosperity gospel teachings and the role of race in conservative evangelical Christianity.

“Kanye West and Joel Osteen are a match made in market-driven heaven,” said Jonathan L. Walton, dean of Wake Forest Divinity School, who noted how West sold $170 “Jesus Is King” sweatshirts with his new album.

“Both have baptized their commercial notoriety and their financial gains in Jesus’ name,” Walton said. “The communion table has become a merch table.”

West’s recent album “Jesus Is King” has earned praise in unusual corners of conservative Christianity, but his comments have raised eyebrows over their association with Osteen’s prosperity gospel teachings, the idea that God grants health and wealth to his followers. Some Christians are also questioning whether black hip-hop artists are being used by white evangelical preachers to boost their own brand and falsely signal progressive racial attitudes.

“Jesus has won the victory. Now, I told you about my arrogance and cockiness already. Now, the greatest artist that God has ever created is now working for him,” West told Osteen on Sunday.

The prosperity gospel has seen a boost under President Trump, who has included in his administration the televangelist Paula White, who promotes those teachings.

West and Osteen are part of a “show-and-tell” prosperity gospel movement in Christianity, which says that God uses people to show he blesses them, said Kate Bowler, author of the book “Blessed: A History of the American Prosperity Gospel.”

“Kanye’s unbreakable confidence that he is the greatest artist on the planet could not have found a better theological home,” Bowler said. “Both Joel Osteen and Kanye West believe that God can best be seen when people are healthy, wealthy, happy and successful, and they are pleased to point to their own careers as proof.”

West recently tied his success and wealth to his newfound faith in an interview with comedian James Corden on “Carpool Karaoke.”

During a 20-minute interview with Osteen during a regular Sunday morning church service, West said many Christians give Osteen a hard time, but when you turn on the radio, Osteen “keeps showing you how good God is.”

“When you’ve got Kanye defending you, you’ve made it, man,” Osteen said while laughing.

West’s new album preempts criticism from fellow Christians. “They’ll be the first one to judge me / Make it feel like nobody love me,” he sings in the song “Hands On.”

During his interview with Osteen, West said that at his lowest point, when he was hospitalized in 2016 after a mental breakdown, God “was there with me, sending me visions, inspiring me.” His own acknowledgment of his recent mental health struggles has raised questions about the reasons behind his heightened interest in spirituality.

“What I do bristle at is the tendency superstar pastors have to stake their claim in superstar converts, sort of chomping at the bit to ride this wave of attention for the sake of strengthening your brand,” he said.

In recent years, white evangelicals have become especially interested in hip-hop artists who are Christians, including Lecrae, Shai Linne and Trip Lee, which has perhaps paved the way for many of them to embrace West’s new work, as well.

“I’m not sure people really love Kanye,” said hip-hop artist Sho Baraka. “They love the idea of him and how they can use him for their particular wars and agenda.”

In 2017, Baraka’s album was pulled from Southern Baptist retailer LifeWay Christian stores because it had the word “penis” in it. In contrast, many Southern Baptists have expressed appreciation for West’s recent album.

While some evangelicals have reservations about Osteen’s theological teachings, many have embraced West as a brand since his recent album release. The American Bible Society has given away 11,000 free Bibles because of the high interest since West’s album release.

“Evangelical culture in America is very fame-driven,” said Derwin L. Gray, pastor of the nondenominational megachurch Transformation Church near Charlotte and a former NFL player. “It has the propensity to use people instead of to develop people.”

West and evangelicals hold a mutually beneficial relationship, said Ibram X. Kendi, a historian at American University and author of “How to Be an Anti-Racist.”

“White evangelicals are showering him with attention because they’ve been criticized for years for their racism,” Kendi said. “Anytime they can embrace a person of color, it allows them to present themselves as not racist.”

“I think there’s more grace for artists who start in mainstream markets and find themselves moving to the Christian market,” Baraka said.

West has been tied to the Pentecostal tradition for several years and was married to Kardashian by Florida Pentecostal preacher Rich Wilkerson Jr. in 2014. 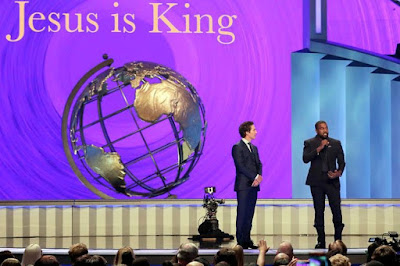 But recently West appears to be receiving input from predominantly white evangelical leaders, including Adam Tyson, who teaches biblical counseling at the Master’s University in California and is pastor of a small Bible church there. Tyson, who declined to comment on West’s appearance there, received his master’s degree from the Master’s Seminary. That seminary, known for its theological conservatism, was founded by John MacArthur, who recently made comments criticizing popular Bible teacher Beth Moore and whether women should preach.

Tyson told Christianity Today magazine earlier this year that an employee of West attends his church and invited the musician to attend his small Bible church, and he did. The pastor later flew to Wyoming to conduct a Bible study for West and his employees. Tyson has preached at Sunday Services, the worship service-like concerts West has put on since earlier this year.

West’s support for Trump and comments that “slavery was a choice” has shaped many people’s opinions — especially those of African Americans — about his recent conversion. Atlanta pastor Jamal Bryant recently condemned West’s positions as harmful after West appeared at his church in September.

The reaction to West has been polarizing among Christians, said Esau McCaulley, a professor of New Testament at Wheaton College.

“People think he’s either the devil or he’s leading a revival,” McCaulley said. “I think he’s neither. He’s a troubled person trying to find healing in Christianity.”

Some black church leaders are worried that the white evangelical leaders who are connected to West won’t push him to question his support for Trump. “Some black pastors say: We want him to get the right Jesus, not the white Jesus,” said Charlie Dates, pastor of Progressive Baptist Church, a historically black church in Chicago attended by about 800 people weekly.

But Dates believes that West’s recent album will transcend “Kanye West” as a brand.

“The gospel message itself has inherent power,” said Dates, who was involved in a private event earlier this year with West. “We should not confuse the potency of the message with the unpredictability of the messenger.”

Osteen’s Lakewood may have been the biggest church West has been in, but he has also made appearances at the Fellowship Missionary Baptist Church on Chicago’s South Side, the Forum in Los Angeles, Howard University and the Greater Allen A.M.E. Cathedral of New York in Queens. Ahead of his appearance at Lakewood, West also held two services for prisoners at the Harris County Jail in Houston on Friday. Jason Spencer, public affairs director for the Harris County Sheriff’s Office, tweeted a picture of the service.

We’ve been taught an incomplete history of Christianity. Black History Month helps us recover it