“Live at Global Kingdom” was a live recording from a concert called the “All Canadian Experience” held in Toronto Canada on Feb 29th 2020. This was the last major event in our city before COVID 19 struck the world! As we take you back to that evening when we celebrated in Toronto as One Church.

Voices of Praise was founded by Kevin Adams in 2002 at Vaughan Secondary School in Ontario Canada. Has then blossomed into a continually growing professional music ministry.
Kevin Adams & Voices of Praise is a praise and worship ministry that strives to be cultured and diverse, not limited to denominations, nations or race. Praise and Worship has become our first ministry. In 2016 Voices of Praise released a Caribbean demo album and in June of 2016 the ministry did their first live recording. Oct 7th 2017 they released their first full album called “One Church United: Phase 1” . The team was nominated for choir/group of the year at the Glass Awards held in Toronto Canada in November of 2017, and was a winner for an Eddy Award for the Best Church Community Choir, which was hosted in Jacksonville, FL. On October 31st 2020 Kevin Adams & Voices of Praise released a EP called “Live at Global Kingdom”. This recording took place in February of 2020 in Toronto Canada which ended up being the City’s last major concert before COVID 19 struck! To encourage and lift the spirits of the people this EP is.
Kevin’s desire is to spread the gospel of Jesus Christ through music as well impact communities abroad. VP hosts an annual event called “One Church: A United Worship Experience” to bring everyone together for a time of worship and praise. Their mission is to raise funds to educated families, friends and loved ones on Mental Health and how we can help support those in depression, dealing with mental disabilities, anxieties and the list goes on.
​Voices of Praise is under the covering of Pastor Marcus Martinez of Destiny and Dominion Word Ministries. With some of the members representing different churches. The team comes together as a unit that is founded in Toronto Canada.
​Our Leaders Kevin and Crystal Adams are parents of 4 with a passion to create music that is multicultural and diverse to give God all the glory. Giving God our best praise is always our mission and joining together as one church makes it even more amazing. #OneChurchUnited #TeamKAVP #KAVPMusic
Available on Applemusic  |  Spotify 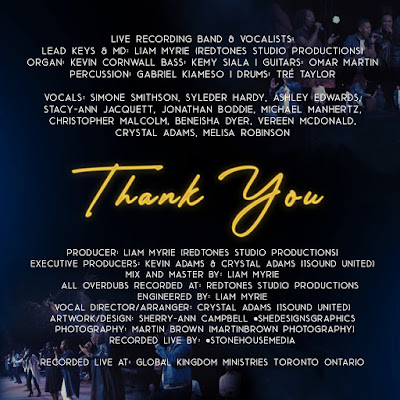