Why Donald Trump’s Twitter ban is bad news for Christians 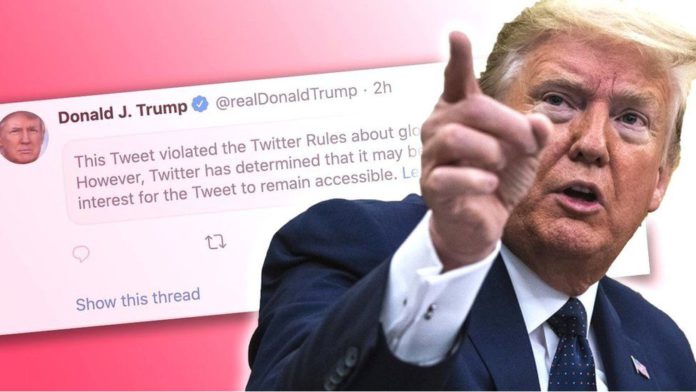 Banning people we don’t like might feel good in the short term, says David Robertson, but what happens when the censors come for Christians?
This week I was banned. Together with millions of others. I can no longer access any of my posts, responses, likes and information on the social media platform Parler.
The news followed the announcement from Twitter and Facebook that they would be permanently banning Donald Trump.
Some Christians have expressed great delight over these decisions, but I fear that they are not seeing the dangers of what is going on. Especially for the Church.
Let’s ask where we are, how we got here, and where we seem to be heading. What are now known as the ‘Big Tech’ corporations; Facebook, Twitter, Amazon, Apple and Alphabet (Google), have amassed wealth, power and influence greater than any previous companies in human history. But, importantly, they have always resisted being described as ‘publishers’. Their argument has been: we provide the paper and the ink, but we do not publish the books.
However, now that they have amassed billions in resources and a virtual monopoly on social media, they have changed their tune. Suddenly they have decided that they are responsible for at least some of the content – although conveniently for them – not legally. This came to the forefront four days ago, when these companies all decided to ban President Trump, and then block one of their smaller rivals, the Parler platform.
The tech companies state Trump and Parler were both banned because they do not meet ‘community standards’. And yet Ayatollah Khamenei is still allowed to tweet “Israel is a malignant cancerous tumour in the West Asia region that has to be removed and eradicated. It is possible and it will happen.” Why don’t these ‘community standards’ apply to him?
As for the claim that Trump has incited violence, earlier this year the online magazine Slate tweeted: “Non-violence is an important tool for protests, but so is violence.” This is typical of hundreds of tweets which have come from Antifa and some Black Lives Matter supporters which have justified violence against people and the destruction of property. And yet neither the perpetrators or platforms were banned then. Why not?
When the Big Tech companies argue Parler facilitated violence (because some posts on the platform advocated support for the Capitol Hill riots) they are correct, but given Big Tech think they cannot be held legally responsible for what is published on their own platforms, what right do they have to hold Parler responsible? It’s one rule for Big Tech, another rule for Parler.
While the German, French and Australian governments, as well as numerous opposition politicians in authoritarian countries like Russia, see the danger in the increasingly extreme approach being taken by Big Tech – many Christians have celebrated it. After all, we don’t like Donald Trump, so this must be a good thing! Isn’t it strange how people are in favour of censorship when they or their friends are the ones doing the censoring? They tend to be less keen when they are the ones censored!
You can see where this will lead. The Californian Woke Maoists decide that saying “men cannot become women” is “violence” – so any organisation or platform that does so is banned. Ditto those who argue that marriage is between a man and a woman, abortion is killing human babies or go against whatever other Woke position, which has been determined as absolute truth by those who don’t believe that there is absolute truth.
In the old world all dictators could do was burn books – or the people who printed them. The book burning equivalents of today – the progressive politicians who work hand in hand with the corporate Tech oligarchs – not only burn the books, but now they can destroy the paper, the printing press and all the distributors. It is a hellish power to have. As the BBC’s media editor Amol Rajan asked; “They are the editors of the Internet. They have more power than any politician or journalist in history. The question that matters is not ‘have they made the right editorial call?’ but rather ‘is it right that a handful of Californian billionaires should hold such sway over the 21st century public domain?’”
We’re entering a dangerous time in the history of Western democracies – and that danger is not primarily from a mob of redneck conspiracy theorists. Rather it is a handful of Californian billionaires with an unparalleled power in human history, who pose the biggest threat. Power corrupts. Absolute power corrupts absolutely. It’s time for that monopoly to be broken up and citizens and governments to regain their freedom.
Author: David Robertson
Source: https://www.premierchristianity.com
Share
Facebook
Twitter
Pinterest
WhatsApp
Previous articleaStepFWD to host unique gathering of world-renowned creatives at Songwriting Masterclass
Next articleVideo: Be Alright by Nah-Tarsha Cherry