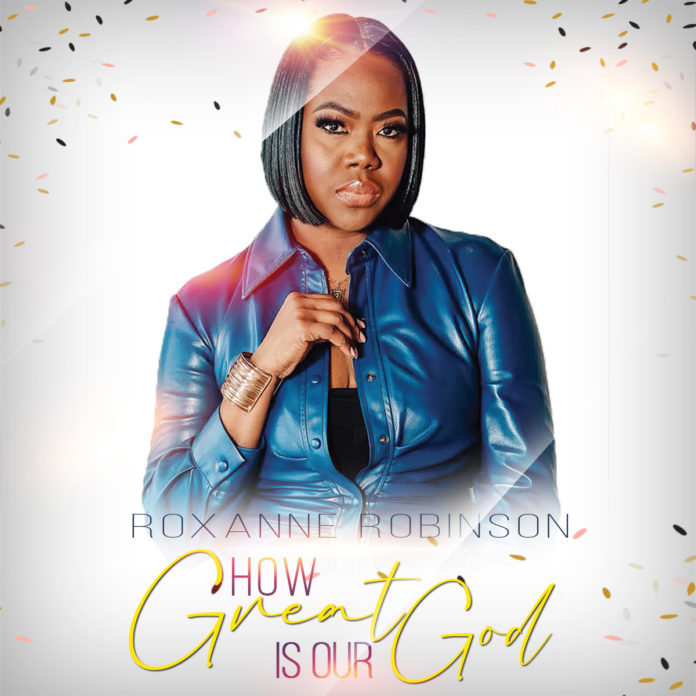 Roxanne Robinson the Canada based award winning gospel music artist releases yet another exciting new music project titled HOW GREAT IS OUR GOD.

The song is a Caribbean version of the popular worship song. It will keep you praising, dancing and will open your heavens as you listen.

In 2015 Roxanne debuted herself titled EP called Roxanne Robinson which received two nominations in the Canadian Glass Awards Show of which she was awarded (New Artist of The Year) and artist featured in MSJ Magazine. She has graced the stage as opening acts for the queen of gospel Shirley Caesar, James Fortune and FIYA, Alvin Slaughter, Tasha Cobbs and many more in her home country. In 2017 Roxanne proceeded to release her new single Yahweh which landed her Canadian Glass Award nominations in two categories and live performance.
On July 20th 2020, Roxanne released a show stopper single called “Holy Rock of Ages” written by herself and Nigel Powell. Holy Rock of ages, went on to win “First Place” in the DC Praise Awards show in the Cayman Island on November 2020. Holy Rock of Ages, also landed Roxanne a Magazine Cover for the online launch for Soulful Magazine.
Roxanne release her worship medley “How Great Is Our God & Mighty To Save” followed by the visual on March 27 live on her Youtube Channel at Roxanne Robinson Music This medley is a compilation of two Christian contemporary praise and worship song, revived Jamaican Style.
How Great Is Our God is now available on all major   DIGITAL STORES
BIOGRAPHY
Roxanne Robinson is an anointed Recording/worship Leader/song writer. Canadian Glass Awards nominee and winner. She is presently one of the main Worship leaders under the ministry of the Administrative Overseer of Eastern Canada, Bishop Lennox Walker at Praise Cathedral worship center in Mississauga.
Roxanne’s appearance on the gospel seen has imprinted a permanent statement that God is real, regardless of what life brings, all praise is due to him. This powerhouse wears many hats, award winning recording gospel artist, an Entrepreneur- hair stylist, custom cake designer, but first and foremost she is a servant of the most high.
Roxanne has graced the stage with the likes of Shirley Ceasar, James Fortune and Fire, Kevin Downswell, Judith Gayle, and many more.
Her story speaks for itself that God is truly amazing, he transforms and liberate those that are bound, restoring hope and salvation.
Credits:
Produced by Austin Rowe Jr. and friends.
@austin_drumaholic
Connect:
Instagram: https://www.instagram.com/roxannerobinson_/
Facebook: https://www.facebook.com/roxannerobinsonmusic/
Twitter: https://twitter.com/roxannerob1
Fanlink: https://linktr.ee/roxannerobinson
YouTube Channel: https://www.youtube.com/channel/UC_meZcxZvT9Qk3blisOYj1A