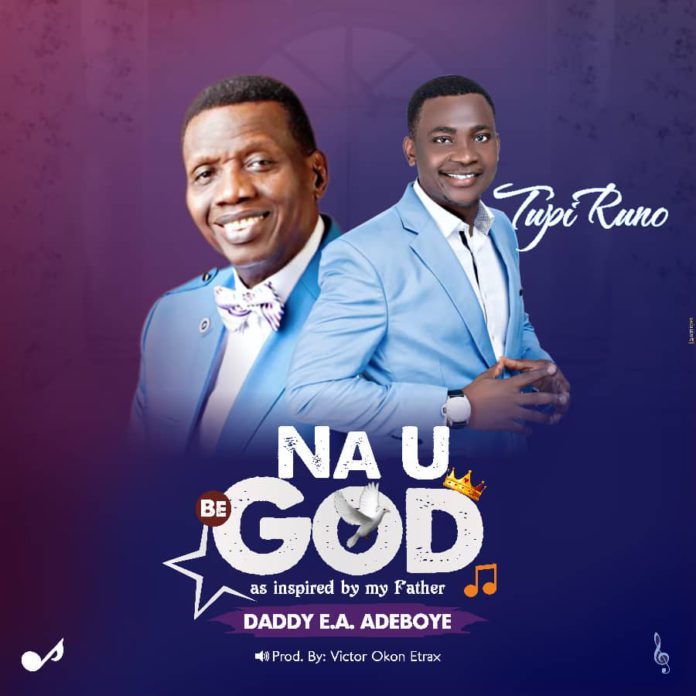 Tupi Runo the Nigerian based gospel recording artist and prolific songwriter releases another brand new single titled “NA U BE GOD” inspired by Pastor E.A. Adeboye
Na You be God is a song birthed from a deep worship experience in God after a study of my father Pastor E.A Adeboye worship lifestyle and reverencing God with so much humility and great adoration.
God is indeed awesome none can be compared to Him. Words can’t express how great God is.
Watch Video Below;
Stream, Download & Share
DOWNLOAD NOW
Available on Audiomack
BIOGRAPHY
Paul Ogheneruno Shishe was born May 7th 1982 to family of late Mr Lucky Shishe and Mrs Rebecca Shishe in Numa clinic, Warri.
He had his primary education in Aileru primary school, Warri and College of commerce and standard international school, Warri. He is a graduate of Chemical engineering from the university of Portharcourt, Nigeria. He  works as field service engineer in some companies in Nigeria and in diaspora.
He started singing at age 16 with his team De Ordained for many years.After his university days  He went solo in 2010 with a hit single ‘Papa God’. He has had the opportunity to minister on the same stage with the likes of Samsong, Eben, Joe Praize and Frank Edwards.
The gospel artiste whose main genre is afro highlife beats has 2 albums in his kitty. The first album titled ‘Na You I Know’ was launched in Port Harcourt in 2014 and this second album was launched in Kuwait titled “My Testimony” now out online and in local stores. This new album has hit song like ‘Favour’ with a video to it’s credit.
He became born again 1998 at a Scripture Union meeting in, Warri. He has a music group called D Eagles. They take worship to the streets, communities and Universities  and win souls for God. He is the founder and leader of the Extreme Worshippers Outreach (TEWO) and is a Member and Minister of Redeemed Christian Church of God, Wisdom Chapel Zonal Headquarter  Elimgbu where he serves as The Zonal Youth President.
Tupi is happily married to Oke Angela and they are blessed with 4 kids; 2 boys and 2 girls.
Credits:
Song produced by Victor Okon for Etrax studios PortHarcourt, Nigeria
Backups and Instrumentals : D Eagles
Video: by Shot on Wenesday
Connect
Facebook Page: https://facebook.com/officialtupi
Instagram: https://instagram.com/tupiruno1
Twitter: https://twitter.com/Tupiruno1
YouTube channel: https://youtube.com/channel/UCtt4-wIH8M_9LcaNnLNO3Cg
Email: tupiruno@yahoo.com
Share
Facebook
Twitter
Pinterest
WhatsApp
Previous article[Music + Video] MY PRAISE – Bukola Kings
Next articleEaster Medley Cover | Resurrecting Elevation Worship| Blood Is Still The Blood Maverick City Music (ADEBOLA & FORTUNE UDOH)