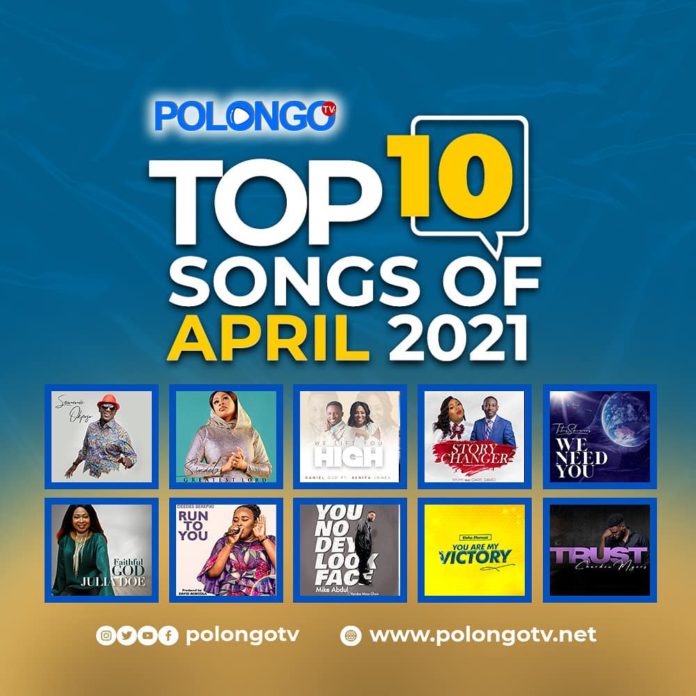 1. TOO GOOD TO BE TRUE – @sammieokposo

International Gospel music minister Sammie Okposo is out with the much anticipated unusual contemporary sound titled “Too Good To Be True.”
The single is accompanied with an unconventional official video directed by Frizzle and Bizzle Films. The techniques that achieved each frame will keep you glued to your screen from the beginning of the video till the end.
It is colourful and captivating. The pump and energy emitted is contagious. It will definitely stir one into its joyous ambiance.
2. GREATEST LORD – @therealsinach
On February 13, 2021, Nigerian superstar, Sinach released new single, ‘Greatest Lord’ to start up year 2021.
The single GREATEST LORD is a declaration of God’s sovereignty and Lordship over all situations and circumstances the world is currently going through. We are in unprecedented times; literally living in Bible days right now, and GREATEST LORD is a worship project to help Christians all over the world recognize Jesus as the solution to today’s hurting world.
Just like when King Jehoshaphat in the Bible was faced with an obviously insurmountable enemy, God’s strategy to him was to put singers in front to lead Israel in worship
3. WE LIFT YOU HIGH – @daniel_psalmist ft. @benitajoneslive
Daniel Ojo the world renowned Canada based gospel music artist teams up with the prolific gospel diva Benita Jones to release a fresh kingdom sound titled WE LIFT YOU HIGH.
Daniel Ojo is a Singer, Song Writer, Gospel Artist, and Worship Leader of The Psalmist Music Ministry based in Ottawa, ON, Canada. Who also currently owns Psalmist Records Label. Daniel Ojo was born in Nigeria but currently resides in Ottawa, ON, Canada.
He has released a number of singles over the years, the likes of “Dwell Here” ft. Kimberly Ade, “Solid Rock”, “Sweeter Than Honey” ft. Geoffrey Golden, “How Great You Are” ft. Javis Mays and many others.
4. STORY CHANGER @wumimusik

Wumi teams up with the amazing Dare David to release the much anticipated fresh new sound for 2021 titled STORY CHANGER.

Wumi is an international gospel music minister with a Praise and worship background that has fostered two albums and a series of great songs that speak to the sovereignty and the power of God .
She is back with a new single  titled “Story Changer “ Her powerful voice echoes the benevolence of God, taking us on a journey that builds our faith in the supreme power of God as the ultimate transformer of our temporary situations, and battles. ft. @officialdaredavid
5. WE NEED YOU @iamtitusshowers

TITUS SHOWERS the phenomenal chart topping US based artist released this song with a convincing live performance earlier this February 2021 as the world seeks to get back on its feet in the post Covid19 pandemic era.

Multiple chart-topping independent recording artist and songwriter Titus Showers, a native of Hammond, Louisiana is certainly an artist to watch. Two Stellar Award nominations, two #1 gospel albums, a #1 radio single and five career top 30 songs. On Youtube, he has eclipsed 1 million views.
And he’s rocked national TV performances such as the 2021 Presidential Inauguration Gospel Celebration for the 46th President Joe Biden, BET’s 2020 Stellar Awards, CBN’s The 700 Club, BET’s Bobby Jones Gospel Show and Stellar Tribute to the Holidays to name a few.
6. FAITHFUL GOD – @juliadoe.official
JULIA Doe, the London based gospel music Artiste finally releases the audio and music video to her much anticipated latest single titled FAITHFUL GOD.
The new single Faithful God; is about inspiring hope and confidence during these turbulent times.
The last year has been devasting for everyone; and people have questions about what has happened.
Without something to hold on to, it is very easy to become discouraged, depressed, and despondent.
This song provides assurance that God is still faithful in the midst of it all – He’s there waiting for you to call upon him anytime, any day, anywhere and He will surely show up and prove himself faithful in your life.
7. RUN TO YOU  @deedeeberepiki

Run to You – is my heart’s cry to the Lord and through a time of worship. I told the Lord in everything and through every season, I choose to run to You.
8. YOU NO DEY LOOK FACE- @mikeabdulnaija @yorubamasschoir

While he features the Yoruba Mass Choir, Mike Abdul reminds us of this character of GOD in his latest ballad, “You No Dey Look Face“.
It’s easy to forget that GOD is not us; To think that human protocols must apply to the ALL – MIGHTY. Luckily the ever present Father doesn’t discriminate, doesn’t ghost, and doesn’t post.
According to Mike Abdul, ‘You No Dey Look Face’ is a song written for those who seek HIS face.
It also has its official music video creatively directed by Ralph Kanye and audio, produced by Tyanx.
However, this is a follow up sound of Mike Abdul’s “Baba Ese” which is still making trends in the Gospel music scene.
9. YOU ARE MY VICTORY @elohoefemuai

International recording artiste and radio show host Eloho releases new single “You are my Victory” a song that resonates with the finished work of Christ & points us back to our victory in Christ Jesus.

You are my Victory is a follow up to her last single “In Your Name” which came after her brief hiatus from the music scene.
The simplicity of the lyrics and melodic rendition further puts a deeper meaning to the song.
The victory we have, gives us power over every scheme of the devil.
And we live far above every enchantment and divination. The Victory of Jesus is at work in us and made manifest at his finished work on the cross.
10. TRUST @chardon_myers

The song TRUST, was written at a time when I was ready to give up on everything. I lost hope in myself, the people around me, my family and even God. I did not see the point in existing anymore. After a time of healing and restoration, God led me to a notepad and the first few words I wrote on the page were “I know You have a plan for me.” I cried. Heavy tears. Then I wrote the rest.
It is my hope and prayer that this “heavenly download” will give you strength, confidence and direction to fulfil all of GOD’S plans and walk in His purpose for your beautiful lives.
Learn more 👇
Page: https://polongotv.disha.page/
Share
Facebook
Twitter
Pinterest
WhatsApp
Previous article[Music + Video] ABBA FATHER – Oluyinka Zibah
Next articleSAMMIE OKPOSO’S “TOO GOOD TO BE TRUE” GLOBAL LIVE VIRTUAL INTERVIEW SERIES