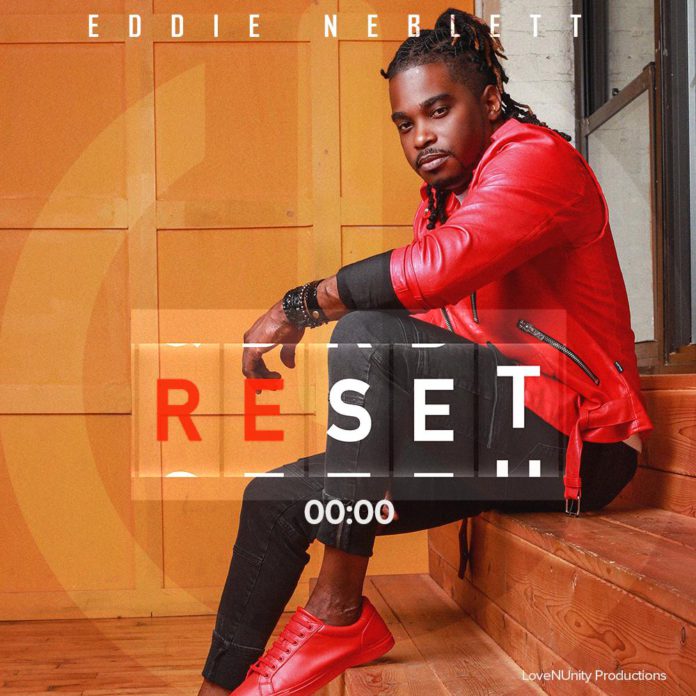 New York (June 1, 2021) – International gospel singer, songwriter Eddie Neblett releases his much anticipated single, RESET, on May 31, 2021. Eddie is well known for songs such as; Love N Unity, River, Influence of Worship, Stepping Out, and Lead Me. He quickly rose to fame in his country of birth, Guyana, where he trended with the song Love N Unity which became an instant anthem throughout the country during their presidential election year. He has since released several successful albums and won multiple awards.
His newest single, RESET, beacons a reminder to never be subdued by fear; instead, pick yourself up because there is hope on the other side. He said,“Once there’s life, there’s hope. Your life has not expired; you can begin again! Reset and thrive!”
Eddie Neblett plans to release several songs that will make a compilation for his eighth-studio album coming soon.
Watch Eddie Neblett Reset (Official Lyric Video);
Available on DIGITAL STORES
About Eddie Neblett
Born and raised in Georgetown, Guyana, Eddie was raised in the church, where he joined the choir at age seven. His mom urged him to enter and signed him up for various shows after she saw his potentials.
One of Eddie’s greatest assets is creating lyrics on the spot to a track that he likes. As he grew in experience, he soon recorded his first song; We Can Make It, followed by his breakthrough hit, Love N Unity, with its infectious beat, catchy lyrics, and his now-famous trademark, rapid-rap style. Love N Unity has become a kind of theme song in Guyana and was the recorded music you heard if you were put on hold when you called the President’s Office at that time. Eddie was asked by the government to perform Love N Unity at the closing ceremony for the Caribbean Cultural Festival, Carifesta, and at the Rio Summit of Latin American Leaders.
He has performed at shows in Brazil with Second Coming Band and also in Barbados, Suriname, St Lucia, St Vincent, Trinidad & Tobago and graced the main stage of New York’s Madison Square Garden. He was featured with the gospel reggae band, Christafari, while they performed in Georgetown, Guyana. Eddie has appeared locally as a spokesperson for the national telephone company GT&T and an advocate for HIV awareness.
Eddie’s vision is to establish a global presence that will reach millions through the ministry of his music. Simply stated, Eddie defines success as being used by God.
Get social with Eddie Neblett:
Instagram: https://www.instagram.com/eddieneblett
Facebook: https://www.facebook.com/EddieNeblett-296547080432754
YouTube Channel: https://www.youtube.com/eddieneblett
SongLink: https://song.link/i/1570109960
Share
Facebook
Twitter
Pinterest
WhatsApp
Previous article(Album) Worth Waiting For – Omoniyi Oni
Next articleMusic: MY SOUL REJOICE – EBY INA