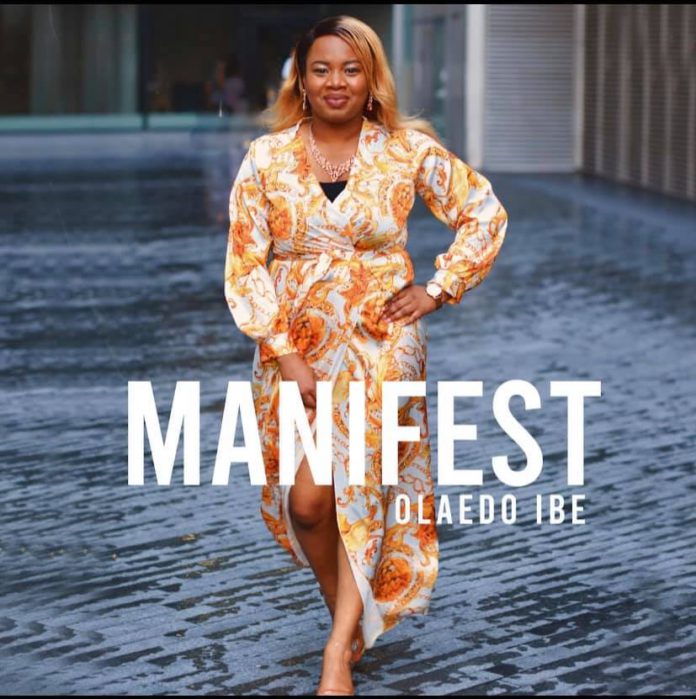 Olaedo Ibe the London based gospel music diva releases another new single titled MANIFEST.
The song ‘Manifest,’ is an anthem for anyone going through adversity, offering encouragement to never give up, as there will be light at the end of the tunnel… God’s glory!
The London artist was going through a challenging time at the start of the pandemic, which led to the decision to put her songwriting skills on the back burner.
The contemporary R&B songstress explains how the Kerba Music-produced track came to fruition: After experiencing strong bouts of writer’s block, I had a dream that someone was singing Manifest. When I woke up I quickly recorded the song and started working on the song in early 2020 during the first lockdown.”
Starting out singing in Church and local events from a young age, Olaedo  found her forte in combining music with words of empowerment that’s relatable and touching to people, regardless of race, background and religious beliefs. Her crossover appeal gave her the opportunity to share the stage with Motown legend Peobo Bryson.
She released her debut EP, ‘Shine Like Gold’ in 2015, which gained a nomination for the MOBO Premier Gospel Music and Urban music award later that year. Olaedo followed up with her second EP, ‘Grow to Glow’ in 2018  which features Lead Me, Good Life, featuring Leke and Becca Folkes, and Fill Us (Children’s song). All three tracks from the EP claimed the top ten spot on the UK Christian Chart.
Watch Video Below;
Available on DIGIGTAL STORES
Written by Olaedo Ibe
Produced by Kerba Music
Follow Olaedo Music on all major social media platforms including twitter, facebook, instagram and subscribe to her YouTube channel for new music and ministry updates.
Instagram: https://www.instagram.com/olaedomusic/
Facebook: https://www.facebook.com/OlaedoIbe/
Twitter: https://twitter.com/Olaedomusic
YouTube Channel: https://www.youtube.com/channel/UCCMH3EvlqvvkrypCbm19yfA
Fanlink: https://songwhip.com/olaedo-ibe/manifest Tye Tribbett – Work It Out (Live At Pulse Twin Cities)

Video: Something Inside So Strong – FSAG VOL. 9 – Special...