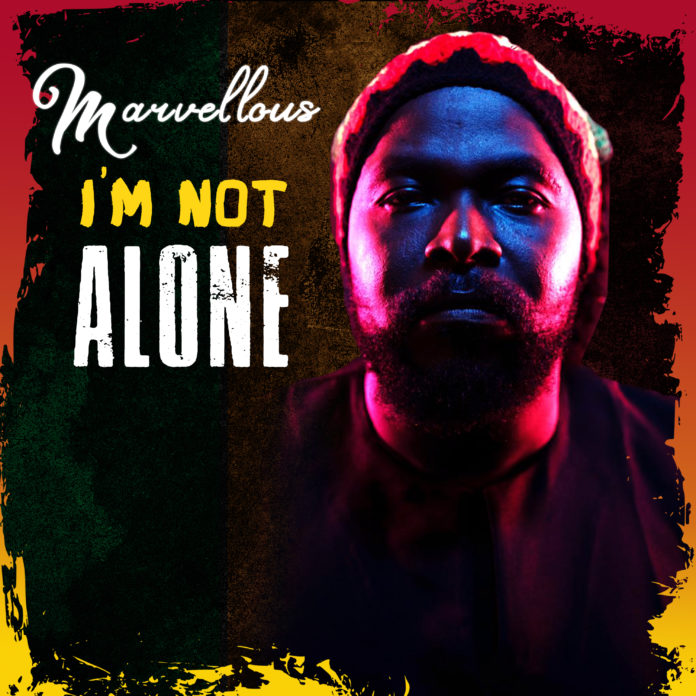 Marvellous the phenomenal gospel music artist releases a brand new song titled I AM NOT ALONE.
The reggae beats, island vibes and scriptural truths in the song is sure to leave a long lasting impression on listeners worldwide.
ABOUT THE SONG
I Am Not Alone is the second track off the 12 track in his upcoming album titled – Son Of Heaven.
It is a Gospel Reggae song of reassurance of the ever present nature of God. Knowing God is with us is all that matters in this ever changing world. JEHOVAH SHAMMAH is ever present with us as believers. Call on him today.
Stream, download, listen and  share to bless others.
Watch Video Below;
Stream on Audiomack;

BIOGRAPHY
Marvellous was born 6 September 1978 in Sapele Delta into a musical family. His parents Bishop John O. Odiete, and his late mum Rita had a couple of successful albums to their credit. His dad wrote and composed the famous song “ALL GLORY GLORY TO THE LORD” in 1975.
He released his first  album in South Africa in 2008 “THE DEFINITION” which did very well at the time with songs like “All about You” which was performed at the Rhema Church in Johannesburg south Africa.
Marvellous grew up in the church circles because of his fathers ministry work and from the tender age of 12 he played the bass guitar; joined the church choir and developed his vocal prowess from there.
He is a graduate of the University of Ibadan Nigeria, with a B.sc in Political Science .
In 2012, he participated in the MTN PROJECT FAME SEASON 5 and came out 1st Runner up. So grew his legend that the slogan “Marvellous is Marvellous” was chanted at the end of his every stage performance.
He has been featured in very successful jingles like MTN’s life is richer campaign just to name a few.
He is happily married with Kids.
He is an Entrepreneur and aspires to be a politician in the coming years.
His musical influences are the likes of Fred Hammond just to name a few. He is nicknamed “African Fred Hammond”.
A God lover and passionate worshipper he is dedicated to his craft.
Follow Marvellous on instagram, facebook, twitter and subscribe to his youtube channel for new music and ministry updates.
Instagram: https://www.instagram.com/marveismarvellous/
Facebook: https://web.facebook.com/marveismarvellous/
YouTube Channel: https://www.youtube.com/channel/UCOowMa95Yp8d0Ruh3kFNTZg
Reverbnation: https://www.reverbnation.com/marvellous6
Fanlink: https://fanlink.to/Im_Not_Alone_Marvellous

Tasha Cobbs Leonard and Ciara New Single “In Spite of Me”

ABOUT US
POLONGO TV is a premium Gospel Music and Christian entertainment platform. We focus on events, talk shows, brands & music promotion. We believe that the message of the gospel and goodnews of God's kingdom is holistic and has the POWER to bring about positive change
Contact us: [email protected]
FOLLOW US
© Copyright © 2022 POLONGOTV.COM | Designed By: Polongotv Team | For Music Placement | Online Airplay On Polongo Radio | Advertisment | Kindly Send Us A Mail: [email protected]
error: Content is protected !!
MORE STORIES