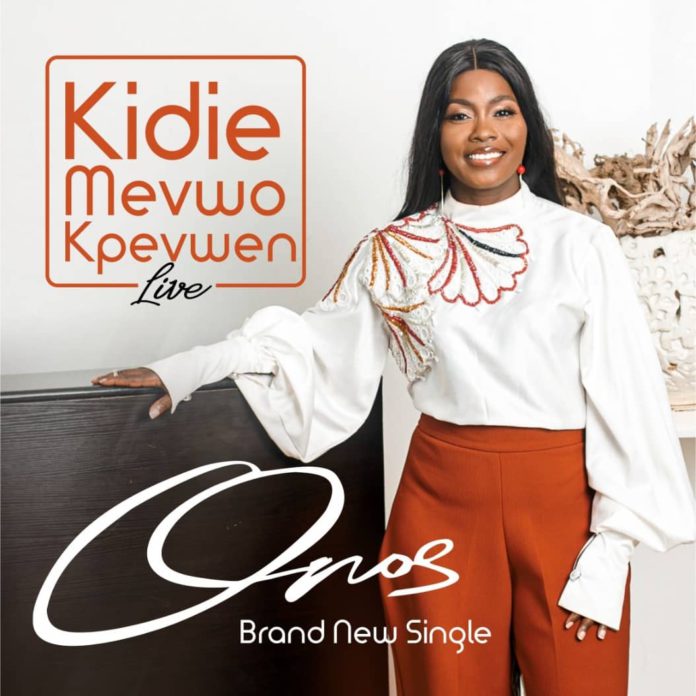 Onos Ariyo the world renowned psalmist releases a new and  unforgettable African thanksgiving song titled KIDIE MEVWO KPEVWEN.
ABOUT THE SONG
Kidie me vwo kpevwe is an isoko song which means what can I thank you with and my response is Praises Praises that’s what I’ve come with. It is a song that is bound to leave you in a mood of deep reverence and thanks giving to God.
The song is ONOS’ 4th Single off her soon to be released 5th Album titled “New Dimension ” as she announced some days ago on her lnstagram.
The song was recorded live in Warri, Delta State.
Stream Below;
Available on DIGITAL STORES
BIOGRAPHY
Onoriode Ebiere Ariyo professionally known as Onos Ariyo is a Nigerian-based singer and songwriter. She is best known for her critically acclaimed song “Alagbara” . In September 2018, she was listed in the Global Top 100 Most Influential People of African Descent (MIPAD).
Onos was born in Delta State in Southern Nigeria where she had her primary and secondary school education after which she gained admission to the Delta State University, Abraka where she graduated with a bachelor’s degree in French. Onos had begun singing while she was in primary school, being a part of a number of different choirs and groups before she moved to Lagos in 2004 where she began recording her first official single, “Dance” produced by FLO.
Sequel to the successful release of her debut single “Dance”, Onos has gone on to headline several gospel concerts in Nigeria, including The Experience – Lagos, which has been described as the biggest gospel concert in the world,[6] where she has shared the stage with a number of notable international gospel artistes, including Travis Greene, Kirk Franklin and Donnie McClurkin.
In 2010, Onos released her debut album Keep Moving, which featured the songs Dance and Na Your Love as well as Jamaican International gospel singer, Chevelle Franklyn, her big break, however, came with the release of her 2014 album No Limits, which featured the break out hits Alagbara and Everything Has Changed. The success of the album, as well as the single Alagbara (written and produced by Wilson Joel)led to her nomination for several awards in the Gospel category.
In 2018, she began hosting a monthly live worship event titled B R E A T H E and in 2020 during the pandemic she kicked off her Lifestyle Talk Show tagged Real Deal with ONOS in which she has hosted different personality from all works of life .
In 2017 she released her third studio album, Songs from the Place of Prayer to rave reviews.
On 28 July 2019, she released her fourth studio album, Breathe on music streaming service Boomplay and other online platforms.
Onos has been nominated for a number of awards since her debut into the music industry. In 2012 she won the award for the Best Female Vocalist at the Nigeria Gospel Music Awards as well as at the Crystal Awards in 2013. In 2015, she won the Wise Women Awards in the Woman in Music category and Female Gospel Artist Of The Year Eloy Awards in the same year. She won the Female Artist of Excellence Award at the African Gospel Music Awards AGMMA in the UK in 2018.
In August 2018, Onos was hosted, alongside other MIPAD honorees by the Nigerian stock exchange at the Gong closing ceremony tagged “Celebration of Excellence”. The event also had in attendance former Vice President of Nigeria, Namadi Sambo.
Onos is married to Kunmi Ariyo and they have two children with 4 albums to her credit and already working on the 5th Album with great prophetic sounds that will impact the lives of so many around the world.
Follow Onos Ariyo on Facebook, twitter, instagram and subscribe to their YouTube channel for new music and ministry updates.
Instagram: https://www.instagram.com/onosariyo/
Twitter: https://twitter.com/onosariyo
Facebook: https://www.facebook.com/onosb
YouTube Channel: https://www.youtube.com/channel/UCYm-pEliFTcH4GjH6zP5akQ
Fanlink: https://ziikimedia.lnk.to/kidie-mevwo-kpevwen-live
Share
Facebook
Twitter
Pinterest
WhatsApp
Previous article(Official Video) NIKKI LAOYE – NEVER FAIL
Next article[Music Video] Onos – Kidie Mevwo Kpevwen (Live)