[Music + Video] TRUST IN YOU – BENESTELLE 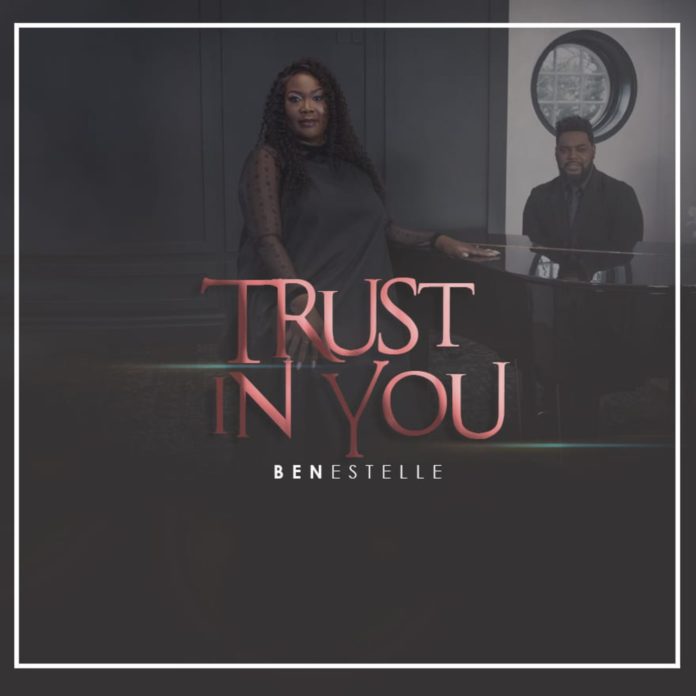 Benestelle makes an epic entrance in 2022 with the release of her brand new single titled TRUST IN YOU.
Trust in You comes on the back of her viral hit – HALLELUJAH in the summer of 2021.
This new ballad is to remind us that trusting in God is the surest guarantee for safety and prosperity in life.
The new music is accompanied by a brilliant a music video symbolic of the excellent quality and high performance delivery synonymous with the BENESTELLE brand.
ABOUT THE SONG
In a new season where God is moving around the world through his army of believers, the renowned worshiper Benestelle, ushers us in a worship experience like no other.
Benestelle, full of God’s compassion and love for people, brings us a new sound that carries the anointing to lift every open heart that hears it. Her mesmerizing vocals brings an energetic yet contemporary sound in her new song titled Trust In You.
According to Benestelle, “God is faithful by whom i have been called. We are in fellowship, we are in oneness together.” There is nothing greater than to know that we are one with the King of Kings and He is more committed to us than we could ever be committed to ourselves. He is dependable.
Benestelle’s entered the world stage with class and poise with her debut single “Love of my Life” in 2020.
A few months later, she released the salvation song For Me, then closed the year with the hit song We Give You. After a short break, she changed the game with the absolutely superb song Hallelujah which went viral immediately.
Benestelle owns and anchors the life changing show: Benestelle Inspires. A conservation aimed at lifting listeners to walk in God’s freedom.


Watch Video Below;
Available on DIGITAL STORES
BIOGRAPHY
Benestelle is a “kingdom class” worshipper and prolific songwriter. Her name is synonymous with excellence worldwide.
Benestelle is an anointed phenomenon happening to the world every moment of life – literally! Her unique and mesmerizing voice delivers energetic, powerful and contemporary tunes that lift your spirit and soul to greater heights.
Her beautiful songs are versatile, fresh and speak to the soul with a sweet sound that brings peace, joy, healing and hope to all creation. Through simple yet spirit filled lyrics, she boldly displays God’s gentle love for mankind in every word she sings, touching everyone who hears it!
In her own words: “God is love. Love is open, accepting and free. Everyone should be able to sing songs that encourage them, lifts them and most especially give hope in an ever loving God and in the future. In a hurting world with people seeking answers, love and faith in God are the answer. As a light into their lives, my music gives everyone the springs and opportunity to experience unconditional love and fulfillment that God alone can give. It affords everyone the opportunity to reach out to Him and experience his loving arms. It’s a great time to trust him with our lives.”
Benestelle has been serving as a member of the music ministry in her church since 2004, functioning in various roles  which enabled her growth and her music. From being a back-up vocalist, she rose to become a seasoned worship leader, ministering in international events such as the Higher Life Conferences and Nights of Bliss.
In 2013, she featured in the Loveworld International Music Concert in Lagos, Nigeria. In 2017, she also featured in the Loveworld Festival of Music & Arts in Johannesburg, South Africa, sharing the same stage with gospel icons such as Sinach. She also served as the national music lead for Canada in her ministry where she helped train choirs and vocalists who in turn formed the regional choir.
Benestelle’s entered the world stage with her debut heartfelt single “Love of my Life” in March 2020, expressing her love for Jesus. 2 months later, she launched the life changing show: Benestelle Inspires.
In this impeccable sound, she highlighted the selfless and unconditional love God has for humanity through the sacrifice of Jesus.
This song featured on major TV stations in Africa.
In December 2020, she closed the year with a celebration song titled “We Give You!” and these songs became popular on TV and radio stations worldwide such as Trace Gospel, “We Give You” filled many nations around the work with dance and joy!
In July 2021, Benestelle filled the atmosphere with “Hallelujah”, a melody she describes as not just a song but a worship experience.
Recently, she has been featured on KiTV’s “Unstoppable Faith” with the renowned Dr.  Kazumba Charles on Canada’s ground-breaking show.
Credits:
Song Writer –  Benestelle
Composer – Benestelle & Promarck
Vocal Engineer Canada  – Patrick Stephensen, Action House Studios
Sound Engineer South Africa – Prosper Makonese, Promarck Studios
Mixing & Mastering – Promarck Studios
Graphics – MunProductions
Music Video – MUNProductions Canada
Follow Benestelle on all major social media platforms including twitter, facebook, instagram and subscribe to her YouTube channel for new music and ministry updates.
Instagram: https://www.instagram.com/theofficialbenestelle/
Facebook: https://web.facebook.com/theofficialbenestelle
Twitter: https://twitter.com/benestelle
YouTube Channel: https://www.youtube.com/channel/UCpnnkXMe_6oc5q-wP2Rifeg
Fanlink: https://fanlink.to/Trust-InYou-Benestelle
Website: www.benestelle.com
Share
Facebook
Twitter
Pinterest
WhatsApp
Previous articleArtist Spotlight: Dara Adewole (Daramuzik)
Next articleMusic: End In Praise – Nelly K