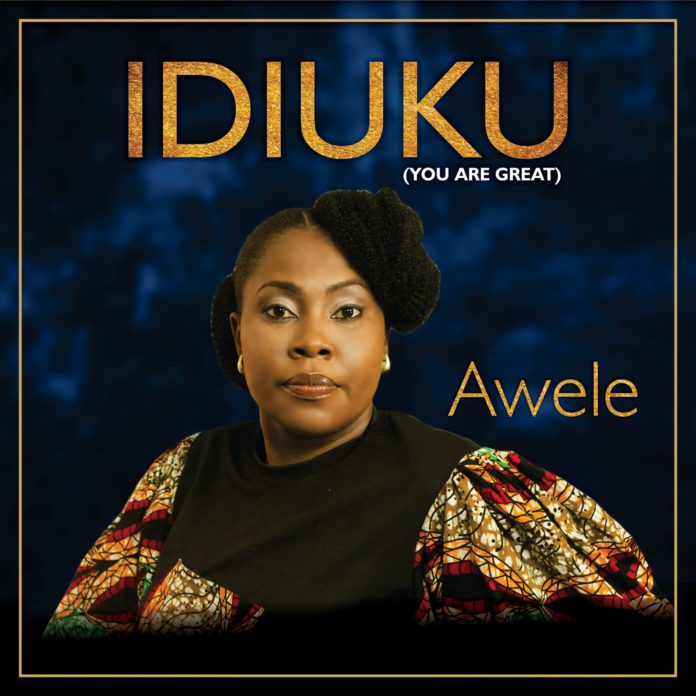 “Idiuku” in Ibo language means “You are great”. This song which expresses the greatness of God, was composed nineteen years ago, and was first  produced in 2015.

In this song, Awele was inspired to create new names for God similar to the Bible days Happenings.

She earned her undergraduate education from Lagos State University and Delta State University, as well as postgraduate studies from the School of Public Health, College of Medicine, University of Ibadan, Nigeria, and the Havard business School.

She served as Vice President of the Redeemed Campus Fellowship DELSU Chapter and Vice President of the Redeemed Christian Corpers Fellowship in Anambra State, Nigeria. Awele a pastor on campus, who also served as a Governor in the Student Union Government, used her position of power to spread the gospel on campus by organizing crusade and gatherings for the kingdom’s expansion.

Awele is the President and Executive Director of Lifetouch Africa, a non-governmental organization that promotes the health and welfare of African women and girls in communities, and was once an affiliate of UICC in Geneva, Switzerland. She is the President and CEO of Lifetouch Publications and Educational Services (LPES Publishers), as well as the Convener of the Single Sisters Prayer Conference and the Inner-court Voices team. She has written a number of publications, both educational and Christian in nature.

She began writing songs when she was nine years old, when she began singing her story books as songs. She eventually joined her first choir ever in the Assemblies of God, before subsequently joining the Redeemed Christian Church of God, where she is presently serving the Lord as an ordained minister.

According to Awele, “In songs and in words, I am called to communicate the gospel of redemption and transformation to the world.  God had always spoken to me about this task through visions, revelations, prophets, and individuals over the years, and when the time was right, I took action.

Years ago, I recall returning from Israel and suddenly, by divine orchestration, we went into worship and praise on the plane before landing, and as we landed, the same comments greeted us as we departed the plane. “

Consequent upon these, it can be seen that the hand of God rests mightily upon Awele and her ministry and she is ready to take the gospel of Jesus to the ends of the earth through her music.

Following her debut and second audio album which happened to be in 2012 and 2015 respectively, Awele is set to release a video album to bless and edify the body of Christ.

She is married and lives with her family in Nigeria.