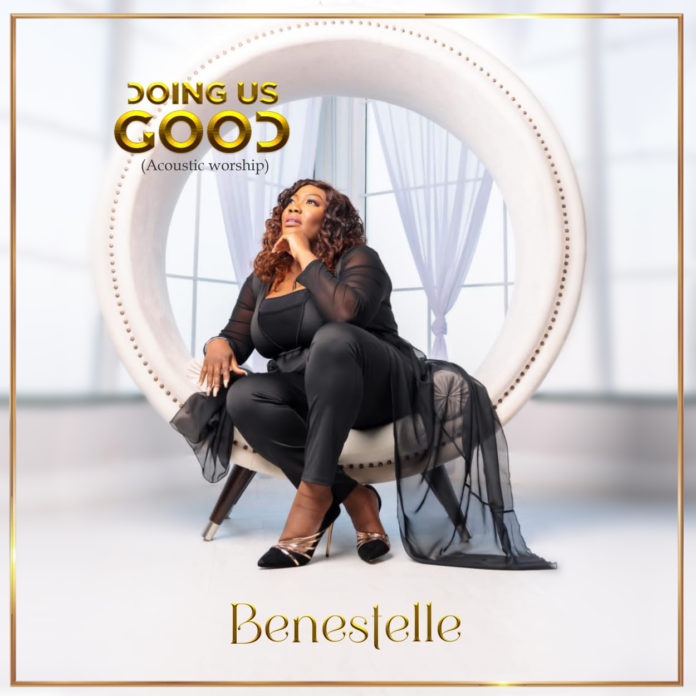 Gracing the airwaves with her praise, worship and, adoration to the King, international gospel recording artist Benestelle releases a brand new acoustic worship single titled “Doing Us Good”. A song created to exalt the name of Jesus and at the same time, usher us into the heavenly realm.

This song is a beautiful reminder that we are not alone and that God’s miracles, signs, wonders and encamping angels are active, alive and still doing us good today.

Benestelle is highly passionate about God, worship, God’s Kingdom, and desires to manifest His glory in the earth. Either through music, or her monthly motivational shows, “Benestelle Inspires” and “Benestelle Flash Reflections”, her goal is to be a blessing and light to many.

Reflecting on her music journey with anointed songs such as the hit single and video “Hallelujah” and the recently released “Trust In You” to name a few, Benestelle has recognized that it is only God’s power, grace and word that has brought her this far.

She continues on this trajectory on bended knee, encouraging us to bow before the throne of grace with this brand new heavenly praise and worship acoustic record titled “Doing Us Good”. When we lift God up, His power moves and He stoops down into the affairs of our life, continually doing us good.

Available on all DIGITAL STORES

Video/Images: Ziggy On The Lens

Benestelle is a “kingdom class” worshipper and prolific songwriter. Her name is synonymous with excellence worldwide.

Benestelle is an anointed phenomenon happening to the world every moment of life – literally! Her unique and mesmerizing voice delivers energetic, powerful and contemporary tunes that lift your spirit and soul to greater heights.

Her beautiful songs are versatile, fresh and speak to the soul with a sweet sound that brings peace, joy, healing and hope to all creation. Through simple yet spirit filled lyrics, she boldly displays God’s gentle love for mankind in every word she sings, touching everyone who hears it!

In her own words: “God is love. Love is open, accepting and free. Everyone should be able to sing songs that encourage them, lifts them and most especially give hope in an ever loving God and in the future. In a hurting world with people seeking answers, love and faith in God are the answer. As a light into their lives, my music gives everyone the springs and opportunity to experience unconditional love and fulfillment that God alone can give. It affords everyone the opportunity to reach out to Him and experience his loving arms. It’s a great time to trust him with our lives.”

Benestelle has been serving as a member of the music ministry in her church since 2004, functioning in various roles  which enabled her growth and her music. From being a back-up vocalist, she rose to become a seasoned worship leader, ministering in international events such as the Higher Life Conferences and Nights of Bliss.

In 2013, she featured in the Loveworld International Music Concert in Lagos, Nigeria. In 2017, she also featured in the Loveworld Festival of Music & Arts in Johannesburg, South Africa, sharing the same stage with gospel icons such as Sinach. She also served as the national music lead for Canada in her ministry where she helped train choirs and vocalists who in turn formed the regional choir.

Benestelle’s entered the world stage with her debut heartfelt single “Love of my Life” in March 2020, expressing her love for Jesus. 2 months later, she launched the life changing show: Benestelle Inspires.

In this impeccable sound, she highlighted the selfless and unconditional love God has for humanity through the sacrifice of Jesus. This song featured on major TV stations in Africa.

In December 2020, she closed the year with a celebration song titled “We Give You!” and these songs became popular on TV and radio stations worldwide such as Trace Gospel, “We Give You” filled many nations around the work with dance and joy!

In July 2021, Benestelle filled the atmosphere with “Hallelujah”, a melody she describes as not just a song but a worship experience.

Recently, she has been featured on KiTV’s “Unstoppable Faith” with the renowned Dr.  Kazumba Charles on Canada’s ground-breaking show.