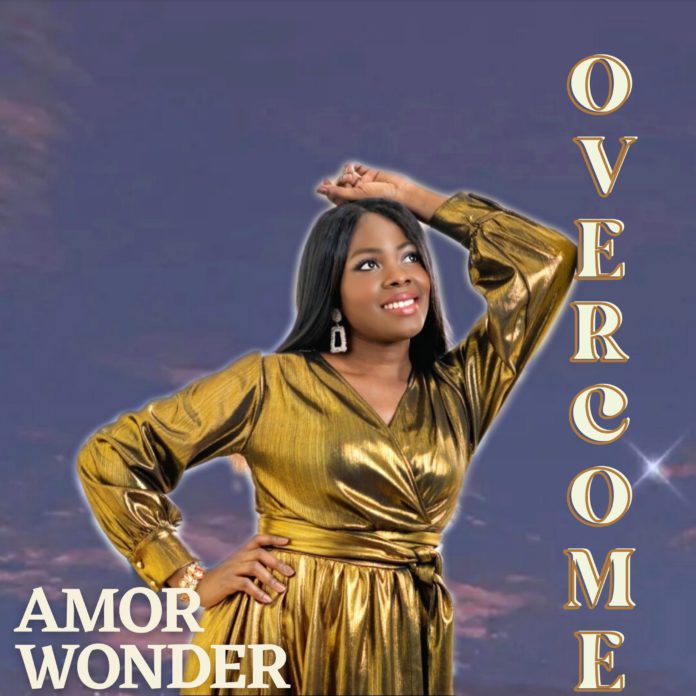 Overcome is a song born from a number of scriptures which have been my daily declaration for the past couple of years. 2019 through 2021 was one of the most difficult time  in my life and God’s word in Psalm 46 and Romans 8:31-35 became my truth, my anchor and strength to make it through.

“God is our refuge and strength, an ever-present help in trouble. Therefore we will not fear, though the earth give way and the mountains fall into the heart of the sea”
“God is within her, she will not fail!:
“If god be for us, who can be against us?

I would feed on these passages daily, so much that they became part of me, and God gave me melody from them. To my surprise, it was different from the other melodies and my other songs. This time, I was not only going to be singing, but equally dancing.

Dancing as a sign of victory, because with God we have victory! Dancing through whatever life may throw at us because truly in God, we overcome the world and all it represents.

Challenges will come, life is full of obstacles and battles  but in all these, we are more than conquerors through him who loved us!

Truly God’s word is truth,  life and has power.

For anyone going through hardships in life and feeling like they are sinking, I pray that God’s word through this song will become alive in you and that these truths will cause you to see yourself as the Overcomer you are in Christ. Yes, because with God, in God we OVERCOME, join us celebrate the victory!

Special thanks to God Almighty and to everyone who took part in this project, all my friends, family, choir group and church family, I am beyond thankful!

Amor Wonder, born Amor Ebot is a Christian recording artist, singer-song writer and worship minister. This is not only one of her greatest passions, but equally, an assignment from God. Amor currently serves as praise and worship leader and choir director at her local church, Omega Fire Ministries Maryland, for the the past 4 years.

HER STORY
Born to African parents, both singers (Cameroonian father and Equato-Guinean mom), and last child of four, who all happened to be music lovers, Amor grew up listening to all kinds of music. “I don’t remember a day going by at home without the record or cassette player (for those who know what that is, taking you back to the 80’s.. lol) or CD player, playing non-stop, and everyone just singing!” she recounts. “There was always this joyful and lively atmosphere in the house” Music is life, as the saying goes!

At a very tender age Amor and everyone around her realized she loved to sing. Be it church hymns, R&B, rap, afrobeat, Indian songs, you name it, She was always singing. “I began writing too and singing the lyrics I had written, though sometimes I ended up forgetting the melodies” she says.

At school Amor took part in musical presentations, joined acapella groups and choirs. “I remember being part of this group at school called The Angelic Voices. We did sound angelic” Smiles. “Shy as I was, I would somehow still find a way to stand before the crowd and sing” she chuckles! Amor says even when she felt nervous, there was something inside of her that would push and propel her to sing. She later discovered. this was God!

When she encountered the Lord Jesus personally and surrendered her life to God in her teens, it all made more sense to her, she says. Amor quickly discovered she was born to do this and felt deep joy, peace and purpose listening to Christian music and singing worship songs be it in church or in her personal time. Her family and friends realized she was destined for this and would tell her how blessed and uplifted they were each time they heard her sing. “To me, this was not ordinary” she says. “This was God!”

Years later, after a period of “lost passion” as she calls it, for what she considers the reason she was created, God brought together all that was needed for His purpose in her life to be accomplished in the most extraordinary way. At this time, Amor says “everything was set,” for her to carry out this assignment. God reignited His fire and opened up a well of inspiration within her.

He put the right people in her life (family, church and friends)

The words of her father in the Lord Apostle Johnson Suleman of OFM world wide over her life a few years back are coming to life before our own very eyes, and all can testify to the source of inspiration and blessing she is to the body of Christ, and the world.

Pastor Gideon who is Amor’s Pastor immediately saw this gift and calling in her and has never stopped encouraging, praying for her and giving her the platform for her to express herself. The reason we are today, because he is the initiator of this glorious event. Her brother Mildmayking Ebot who is equally her manager and executive producer has played and still plays a pivotal role in her music career and ministry. “He is the driving force behind it all” she says. They all work as a team with her sister in law Bess who is God sent, Amor says.”I can’t thank God enough for them”, she adds. “It amazes me how God’s plan for your life will always come to pass as long as you remain in Him, no matter the obstacles and challenges.” I cannot end without mentioning my mom, who is my daily source of encouragement, my prayer partner and backbone. I’m thankful for all these people and so many more I can’t mention on here for the sake of time.”

MINISTRY & MUSIC
Since 2015, Amor has actively served in her local church, Omega Fire Ministries (OFM) Maryland as a chorister and praise and worship leader, where she now serves as Choir Director, for the past four years. Amor is also part of the OFM USA Mass Choir and has equally served with Dulous Worship Band at Cornerstone church, Maryland. Prior to this time, at a very young age, Amor always found herself active in the choir departments of all the churches she attended, and was equally part of several Christian music and acapella groups, and Christian youth fellowships.

Amor became Amor Wonder in 2018. Wonder, a name she says was given to her by God for her Music ministry. We will later hear this name in 2021, as the title of her hit single, A Wonder.

Between 2018 and 2022, Amor has released 6 powerful christian worship and inspirational songs. She is currently working on her first album that will be released later this year. These songs have been a source of inspiration and upliftment to countless people across the world.

Amor’s writing style is quite unique and sometimes unconventional. Her lyrics are scripture-backed and music so power-filled and uplifting. This, coupled with her melodious angelic and powerful vocals have captivated many hearts, pointing them to God. Many who hear her songs can attest to the palpability of God’s presence while they listen to her music.

Amor’s songs are known to cut across culture, language and even religion, as many testimonies have been recorded from Hindu and Buddhist listeners. This could be easily attributed to her style, which spans across the various types of Christian music, be it praise, worship, gospel, contemporary, afro Caribbean, hymns, and more, giving her a unique and captivating sound. Amor however, attributes this to the Holy Spirit, whom she says is the one who speaks to the listeners’ hearts.

Without him, her music would be as good as noise. She says God is her inspiration, and her music is a depiction of who he is – LOVE – to everyone; “Love knows no language, color, reliion, culture or status. Love is God, God is love” she adds.

Her desire and earnest prayer is that God’s Word through her music would restore, transform, save, deliver, heal; bring the world to experience Him more intimately and come to the full knowledge of who God created us to be.